He is roughly 17 inches shorter and 140 pounds lighter. But for Lions running back Shaquille Murray-Lawrence, the name has everything to do with Shaquille O’Neal, the once-in-a-lifetime talent who took the NBA by storm immediately after being drafted by the Orlando Magic in 1992. It was likely a popular first name choice for basketball-playing kids born in the early to mid-nineties.

“My parents are huge basketball fans, that’s where it came from,” said Murray-Lawrence, the Lions’ third-round selection in 2015. “Everybody was expecting me to be a basketball player and that didn’t work out, so here I am.”

Playing a variety of team and individual sports growing up certainly prepared him for dealing with the expected growing pains of being a professional. After the expected departure of Andrew Harris, the club quickly snapped up veterans Anthony Allen and Jeremiah Johnson in the opening hours of free agency. A young prospect like Murray-Lawrence would no doubt have been clamouring for a bigger role in the offence, but the product of UNLV is embracing the veteran presence, and looking at it as an opportunity to grow and develop. More importantly, he understands what it means to the Lions as a whole. 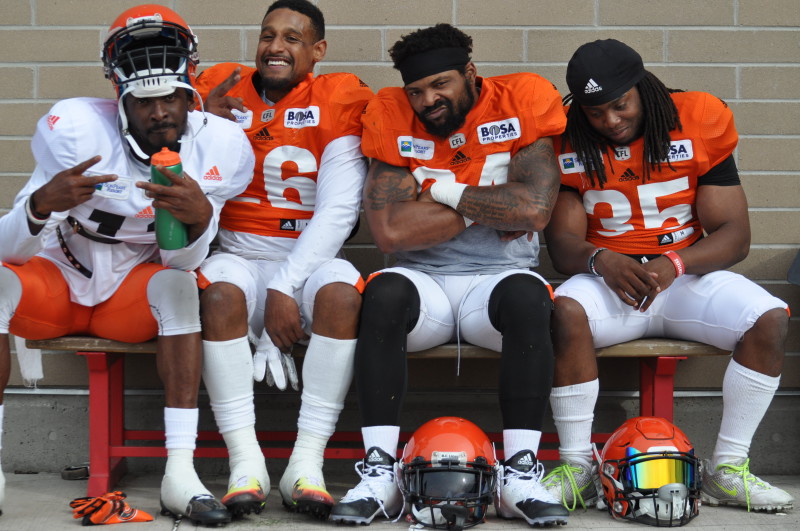 “Those guys take care of me on and off the field, make sure I’m in the right places, go over the playbook with me and I just watch how they carry themselves as pros. As soon as those guys signed, I looked at it as we could be a three-headed monster in the backfield.”

Adam Blasetti, the first-year Lions running backs coach who works with them on a daily basis, has been impressed with not only how hard the unit works, but how they push one another. “The entire group is lucky to have each other around,” Blasetti said. “The best thing about them is they each want to make the entire 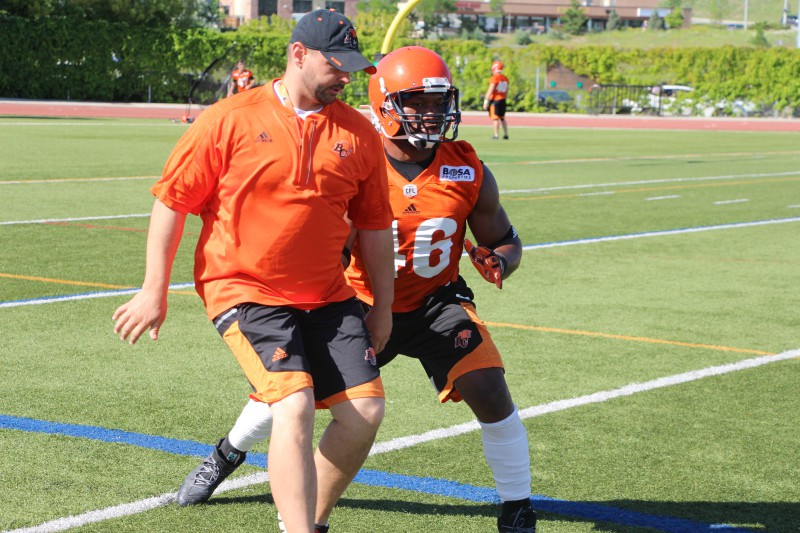 group better. There is no division or hierarchy in our room. Both Anthony and Jeremiah want to see Shaq reach his full potential and see that he has the tools to be’ the guy’.”

A big part of Shaquille’s role is making sure he is ready to come in and contribute in the backfield when called upon, just like on July 1st in Hamilton when Johnson went down with an ankle injury. Murray-Lawrence scored his second career touchdown on his first carry of the game to kick-start a big second half in the 28-3 victory.

“IT’S A NEXT MAN UP TYPE OF BUSINESS,” THE SCARBOROUGH, ONTARIO NATIVE SAID. “ONE GUY GOES DOWN, THE NEXT GUY HAS TO BE ABLE TO COME IN WITHOUT MISSING A BEAT. IT WAS A GREAT FEELING TO SCORE BUT YOU ALSO HAVE TO MOVE ON TO THE NEXT ONE.”

Since that windy Canada Day evening in Steeltown, Allen has shouldered the load and played a big part in establishing the Lions’ ground game. Thanks to a rushing TD of his own and an acrobatic flee flicker TD toJonathon Jennings, he most recently helped take down his old team in Saskatchewan and make sure the club entered it’s bye week with a 3-1 record. Next man up, indeed.

“Shaq has worked hard since the beginning of camp, learning the system and keeping himself ready for any situation,” Blasetti added. “I don’t look at him as a role player, but as a young and developing back who is battling day in and day out to be a featured running back.” 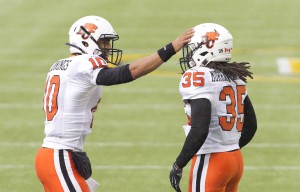 Growing up in Ontario, Murray-Lawrence excelled in basketball, hockey and track before earning his football scholarship to UNLV. Highlights of his track career included beating 200-metre runner Brendon Rodney, also a member of Canada’s 4 X 100 team heading to the Rio Olympics next month. It was with that squad that Rodney helped bring home the Bronze Medal in last year’s World Track and Field Championships.

“I will definitely be watching him,” Murray-Lawrence added. “There are a few guys on the Olympic team I used to run with or against, so it’s 100 percent certain I’m watching the Olympics.”

“He threw down some good numbers. I think he ran a 9.99 two weeks ago. It would be great for him to get on the podium.”

Based on the running game and balanced offensive attack through four games, there is reason to think the Lions could have a good chance of being on top of their game themselves.