Q&A with Calvin McCarty ahead of 200th CFL game

When he was a rookie with the Edmonton Eskimos back in 2007, Calvin McCarty had a training camp conversation with then-veteran Mathieu Bertrand.

The fullback asked the fresh-faced, fourth-round pick how long he wanted to play in the CFL.

“I said 10 years and he looked at me like I was crazy,” McCarty said this week.

Now 34, McCarty has one-at-a-timed his way into his 13th season in the CFL. When he takes to the field on Friday night in Hamilton to face the Tiger-Cats, McCarty will hit a milestone in his career. It’ll mark his 200th game in the CFL.

That puts him in exclusive company. Per CFL Stats god Steve Daniel, McCarty will be just the 107th player to hit that mark in league history. Going back to 1936 and through 10,250 players that have played at minimum one game, that makes him about a one in 100, or one per cent of players in CFL history.

What makes it even more special is that only three other running backs have hit the 200-plus games played mark. George Reed (203), Chris Szarka (223) and Jeff Johnson (234) welcome him into that exclusive club.

“It feels good. It’s a testament to everybody that helped me along the way: My parents, coaches, teammates.”

McCarty had just completed a light practice when we spoke this week. He stood on somewhat unfamiliar ground, with the Esks spending the week in Hamilton after their win in Ottawa on Saturday. The team practiced at McMaster University.

In 200 games you see a lot of things and log a lot of miles, figuratively and literally. With that in mind, I wanted to talk with McCarty about some of the big things and a lot of the little things that go into that journey. Our conversation has been edited and condensed.

Chris O’Leary: What would you say to your rookie self now?

Calvin McCarty: Just stay the course, man, keep learning. A lot of the stuff that the veterans told me. Coach (A.J.) Gass coach Tuck (Jason Tucker). Guys that are coaching me (presently) that were coaching me as players and playing at the same time. I would tell myself the same things those veterans were telling me then. Keep working, put the horse blinders on, keep moving. Don’t get too high, don’t get too low, man. And keep finding something to get better at every day.

I came in at that time having never played a snap before at fullback and/or tight end so when I came, I was playing those spots but I didn’t know what I was doing. I was bad. I’d tell myself to stay open-minded and work hard.

CO: Gizmo told me a long time ago that he always tells young players that if they want to have long careers they have to be versatile.

CM: Special teams was a way to keep myself on the roster and keep myself available. The best ability is availability. If you’re not available, you’re not playing. In this game people go down, start getting banged up, whatever it is. There are other things that may may knock somebody off course but if you can stay consistent, stay right on special teams and be there, be consistent (you’ll succeed). When they call on you in meetings, answer the questions and know your assignments. Study. Everybody works out, everybody runs, everybody does those things. And really it’s the time that you invest in the classroom. I feel like that allows you to play fast.

CO: Thirteen years in, what’s the best road trip in this league?

CM: I played my high school ball in BC so I do enjoy going to play in BC. I won a couple of provincial championships during high school, playing with (Jon) Cornish. My dad coached me when I played for the North Surrey Falcons, so BC.

(I like going) anywhere in the West. Now, you don’t like them, everyone’s a rival. We haven’t had much success in Calgary since I’ve been in the league, so I do enjoy going to Calgary. But it sucks losing to Calgary.

After playing these guys as opponents so many times, you don’t like any of them. But the trip I do enjoy is when I get to go back to BC and see a lot of familiar faces in the stands. The guys holding the sticks, the refs. When I go and play in BC, it’s the same guys (from high school). Some of those guys were umping my baseball games. Like, ‘I remember you, you kicked me out of that one game.’ (He laughs.) I’m just kidding, I was usually good, I never got kicked out of games.

CO: What’s a go-to for food? What’s the best meal you’ve had?

CM: One of the best ones was probably that Moncton trip (for the Touchdown Atlantic game), for sure.

CO: Did you have lobster?

CM: I didn’t really understand the whole lobster thing so I had a steak (he laughs again). Now, looking back at it, my wife’s like, ‘You’re an idiot. You should have had it.’ And I’d probably have it now if I went back.

CO: Did you ever stay at a haunted hotel?

CM: Saskatchewan, right? I feel like that’s haunted. I haven’t had any encounters but I’ve mentioned it to some players. I don’t have any stories for you, but I’ve heard that many times.

CO: What’s the worst flight you’ve been on?

CM: I do not like…I don’t even like roller coasters, the pirate ships (a ride at the West Edmonton Mall). I don’t like any of that stuff. I couldn’t tell you about a flight, I probably passed out.

CO: Who’s been the best teammate?

CM: Man…that’s tough. My guy Freddy Stamps. We came in as rookies together. Hotel Ramada. It’s really good guys across the board, I could name a lot.

Freddy obviously because we came in together and experienced it together. When we won that Grey Cup (in 2015) that’s who I was thinking about after, who I wish would have had an opportunity to be here. Nothing against Kenny (Stafford, who came to Edmonton in the Stamps trade) or whatever happened. Kenny’s my buddy too. That’s just the business and the way it goes but Freddy Stamps.

CO: Is the Grey Cup the highest high? 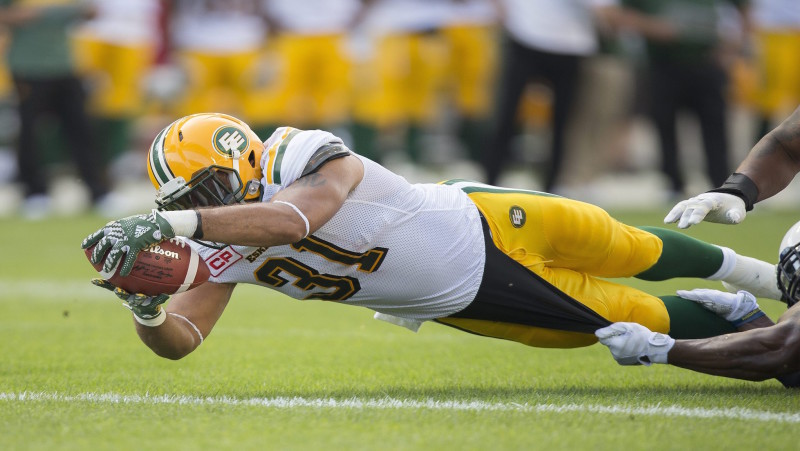 CALVIN MCCARTY DIVES FOR A TOUCHDOWN IN 2016 (GEOFF ROBINS/CFL.CA)

CM: For sure. That’s what keeps you coming back now. I didn’t know what I wanted to do with it at the time. It’s kind of a blur post-game. But now you see it, you kind of have a game plan of what you would do differently.

CM: The lowest low I would say is not being able to play. I’ve wanted to play football since I was seven-years old. To still have an opportunity to play, I mean how many teams do we have here, nine? Thirty-two in the States? So 41 teams, there aren’t that many opportunities for guys to live out their dreams.

Even the lowest low I don’t think is really that low. That would be not making the playoffs and having a chance to pursue your dream. But the lowest low, I’ve been pretty lucky (he tries to find something to knock on).

CO: Who’s been the most talented person in the locker room, excluding football ability?

CO: As long as I’ve known you, you’ve sat next to the starting QB in the locker room. You were next to Ricky Ray, Mike Reilly, now Trevor Harris. And the media always crowds around them into your stall. Does that suck?

CM: You get used to it. It was kind of a spot that I think pops (Esks’ equipment manager Dwayne Mandrusiak) put me in. My first year I was next to coach Tuck and I learned a lot from him about being a pro and just being present and being accountable, being available. That was my only year not being next to the QB. Even Tuck was still getting a lot of (media) action. Since I’ve been in the league that’s what I’ve been dealing with, so it’s fine.

CO: How much longer do you want to play?

CM: It’s really not up to me. We’ll see how it goes but, another two, three years. We’ll see. Afterwards? Coaching, management, I don’t know yet. I want to do something involved in the game.

CO: If you win another one this year or next does that change your timeline?

CM: I don’t know. I’d talk to my family, enjoy it, be present. Then we’ll see how I feel after.

CM: A lot, heck yeah. It’s a long time. How much have you changed?

CM: You’re a little fresher, a little more pristine with the kick choices. I’m a little less on the kicks now. That has something to do with the kids, they get the shoes. Every once in a while I might go get myself something. What was your question again?

CO: How much you’ve changed in this time.

CM: You change, bro, for sure. I think the change comes with position, being older, more mature. Two-a-day workouts. Training camp’s changed, the stadium’s changed, the grass has changed. Everything has changed. Change is definitely constant. But at the end of the day the football stays the same, the lines are the same, the positions are the same. Football hasn’t changed that much.