No shortage of talent in Onyeka family

With each tight spiral thrown and each catch pulled in, you might start to get confident at your next family get together that there’s a not-too-shabby squad running around your backyard. Until you stop by the Onyeka household in Brampton, don’t get too far ahead of yourself.

“So, I have my little brother that plays at Carleton and my cousin, Kosi plays at Guelph. I have another cousin in high school that is going to be pretty good too,” Godfrey Onyeka, the Wilfrid Laurier defensive back and sixth-ranked 2018 CFL Draft prospect said over the phone on Tuesday. “Then there’s me and Nakas, so there’s five in total who play football and who play at a relatively high level.”

And that’s Godfrey being modest.

Nakas was a fifth-round pick by the Argos in the 2017 CFL Draft. He impressed enough in training camp that he wasn’t sent back for his final year of U SPORTS with Laurier. He played in 17 games this year and had 14 special teams tackles as part of a Grey Cup-winning team.

After four years at Laurier, it’s Godfrey’s turn on deck with the CFL Draft. In the second edition of the Scouting Bureau’s rankings, he sits at six, making him the highest-rated U SPORTS player on the list. His brother, Kene, a defensive lineman at Carleton is at 14.

That backyard football team was about as good a training ground as a player could find in Canada.

“It was great,” he said. “Nakas is crazy passionate and competitive. My little brother’s a little more subdued but competitive as well. We all push each other. No one wants to be the worst player in the family.

“I think we’re all relatively athletic and I guess we all have a little bit of aggression in us that you need to have to be a football player. We’re all pretty intelligent, so that helps as well.”

Godfrey had a team-leading 42.5 total tackles this year, along with three knockdowns, an interception, two forced fumbles and two recoveries. He helped take the Golden Hawks to the Yates Cup, where they ultimately fell to the Vanier Cup-destined Western Mustangs.

The competitor in him sees players ahead of him on that list and wants to catch them between now and when the next rankings are out in April, after the CFL Combine presented by adidas in Winnipeg at Mark’s CFL Week. At the same time, he said he knows that making the list at all is something special. 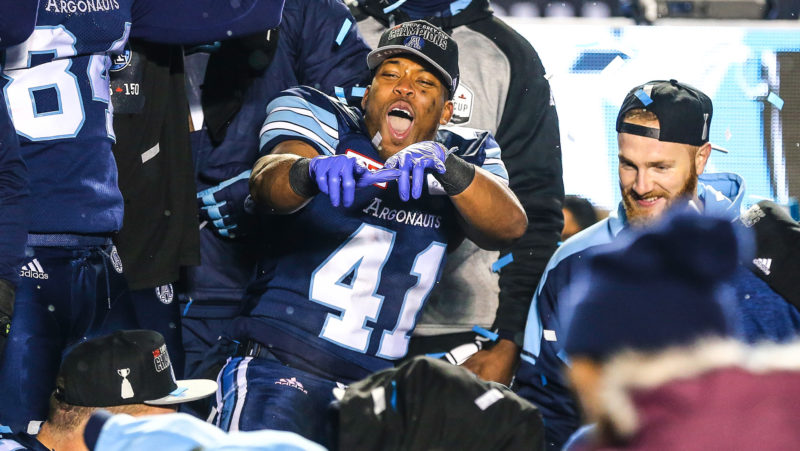 NAKAS ONYEKA WON A GREY CUP WITH THE TORONTO ARGONAUTS THIS YEAR IN HIS ROOKIE SEASON (ALEX D’ADDESE/CFL.CA)

Sitting on a conference call with Alberta offensive lineman Mark Korte, who debuted at No. 12 after missing out on a spot in the initial rankings in September, and with Ottawa defensive back Jackson Bennett (up to No. 13 from 19 in September), all three said they’d grown up envisioning themselves in their favourite teams’ uniforms but would just be happy to be chosen in May’s 2018 draft.

“Being from Edmonton, born and raised as an Eskimos fan (it’d be cool to be chosen by them) but I’ve got guys I’ve grown up with, guys that I’ve played with that are playing around the league,” Corte said. “I’d be happy to be anywhere at this point. I’m looking forward to it.”

For Bennett, whose hometown is Cumberland, Ont., Edmonton holds some sentimental value.

“For me actually, Edmonton would be pretty cool just because I used to live there back in the day. My dad’s from the military so we used to move quite a bit. But honestly, it’d be a blessing to play anywhere,” he said. “I just want to play football.”

“It’d be cool (getting drafted),” Onyeka said. “You’re getting paid to do what you love, so it’d be cool to play anywhere. Obviously Toronto, my cousin’s there, it’s close to home and it’s a nice city. BC, it’s sunny a lot of the year, so that’d be nice not to be in the cold. And Saskatchewan has a little swagger. Realistically anywhere to get paid to play football would be a dream come true.”